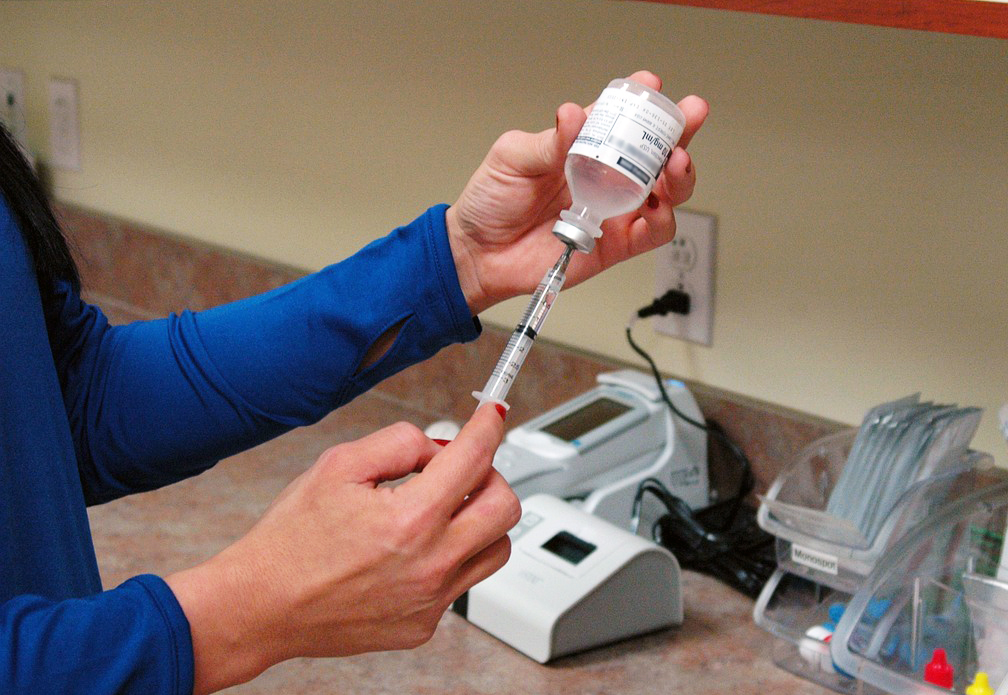 Temperatures are dipping nationwide, but flu season is heating up this year. Forty-three states are reporting higher than normal flu activity this season.  I’ve been lucky, I’ve only had the full blown flu twice in my life. Both times as a college student. The stress, lack of sleep and poor eating habits of student life made my immune system the perfect weakened host for the virus. It was something dreadful; exhaustion and aches so severe in my neck that I swore I had meningitis not the flu.

I’ve also only had two flu shots in my life. The first was during the great swine flu scare of 2009 and the second this past November. Since I had been getting sick quite a bit, I had a sneaking suspicion that this would be the year that my luck would run out and I would succumb to the virus again. Thus, I decided to go and get my flu shot. It is, after all, free for LLU staff and students at Student Health Services.

On both occasions after receiving the vaccination, I’ve suffered all of the side effects. This year, however, after receiving the vaccination I promptly came down with a mild flu. Now, I know full well that the flu vaccination doesn’t cause the flu, but the timing was awfully suspicious. And thus, in my sickened misery, bitterness and frustration, I found myself telling others “I got the flu from the flu shot." I heard a lot of mixed responses, but they can be summarized in two general responses: people that could commiserate and had similar stories of getting sick as a result, they thought, of the vaccination, and others who adamantly stated that I was being silly and that the flu shot didn’t cause you to get sick.

After my brain cleared from the billowy clouds of illness, I started to think: Had I done harm by claiming to get the flu from the flu vaccination? Was I perpetuating a false, yet commonly held belief? Would my tale cause others to avoid the flu vaccination and subsequently fall ill? So, I want to set the record straight by going over some frequently asked questions. It may seem like I'm preaching to the choir, public health students have heard this all before. We're the ones that preach it, but we also tend to ignore our own advice.

Can I get the flu from the flu shot?

No. Flu vaccinations are made with inactive virus, and not ineffective. The nasal spray is made with attenuated virus, not enough to make you sick. However, it takes about two weeks for your body to make antibodies after receiving the vaccination.  If you do get sick after getting the flu vaccination, it’s most likely because you were infected before receiving it or before the vaccination antibodies had a chance to kick in.

Can I get the flu during flu season even though I received the vaccination?

You can still get the flu after receiving the vaccination. However, it will be a milder form of the flu.

Should I get vaccinated?

Yes! The more people who are vaccinated, the more we can stop the spread to others. Children, the elderly, pregnant women, and health care workers should especially be vaccinated.

But I heard this year’s vaccination wasn’t effective:

The CDC is reporting that this year’s flu is a particularity virulent strain and that the virus mutated after the vaccination was developed. As a result, this year's vaccination is about 33% effective. But you’re still better off getting your flu shot. Even if the vaccination isn't exactly matched with the virus, it can still provide some protection and reduce severe outcomes.

I don’t feel well, but I’m going to work/school anyway:

We all like to believe that we’re exempt from the rules. That our co-workers and classmates can’t possibly function without us around. But your coughing and sneezing will not only be a distraction to others, you’re also putting them at risk for getting the flu. Don't try to be a hero. Instead, stay home, rest, and watch Netflix.

What else can I do to prevent the flu?

Most importantly, be a responsible public health professional and set a good example for others! Visit the CDC's flu site to find out everything you ever wanted to know about the flu.