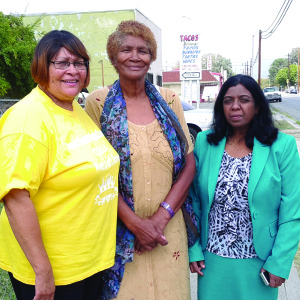 According to Rev. Ray Turner, from the Temple Missionary Baptist Church and Outreach Centers in Westside San Bernardino, poverty, fractious politics, and lack of vision contributed to the city’s problems. It is suggested that the city, county and state need coherent strategies to turn the city around.  Loma Linda University has initiated the process to help build the city back to its normalcy.By Padma UppalaWestside San Bernardino, at one time a vibrant drug-free city and home primarily to blue-collared workers, is the second poorest city in the United States; surpassed only by Detroit, Michigan. By 2010, 36.4% of San Bernardino residents were classified as living in poverty. The crime rate rose to 53 per one thousand residents, making it one of the highest crime rates in the United States. Approximately 30% of adults engage in binge drinking. Crack cocaine came in the 1980s, during which time violence skyrocketed and many Westside youth went to prison.  “Westside” is used generically to refer to the area west of freeway 1-215. San Bernardino County is the largest county in the United States with a population of two million living in diverse geographic and civic environments. Loistine Herndon, executive director of Temple Community Outreach has lived and worked almost her entire life in Westside San Bernardino stated that she “has never seen it so bad.”

San Bernardino County is the fourth most obese region in the United States, with two out of three residents considered overweight or obese. When compared with neighboring counties and California, San Bernardino has the highest level of overweight obese adults, which is about 68%; third highest heart disease rates in the state; and approximately 71% of school children do not meet fitness standards.  It has the worst health food areas, with six times as many unhealthy retail outlets and two-thirds of adults do not meet recommended physical activity levels.

Loma Linda University, located in a blue zone city with its mission to further the healing and teaching ministry of Jesus Christ to make man whole, is in the same county as the Westside of San Bernardino and experiences the best health outcomes in the world. Few professors and public health professionals venture into this crime-ridden neighborhood to help the residents.  Professor Uppala and students from the school of public health have been working with obese women and women at risk for breast cancer in the west side of San Bernardino for the past five years.  They give educational sessions and engage the women in lifestyle interventions that include healthy eating habits and physical activity.  Breast cancer ranks 45th compared to the rest of the counties in California (one being the best and 58 being the worst). Between 2001 and 2005 approximately 10,000 invasive and 2,000 in situ breast cancer cases were reported in Region 5 of the San Bernardino County women in California. Although data reveals that the age adjusted incidence rate of 23.7 for in situ breast cancer cases in the Region 5 population is lower than the state-wide rate of 27.3, the number of in situ cases in the area rose from 9.6 in 1988 to 24.8 in 2007.

In the lifestyle intervention research grant funded by the Kaiser Permanente Fontana Community benefit grant and Susan G Komen for the Cure, Inland Empire Affiliate, 58 women made up of 36 African American and 22 Latina women from the Inland Empire engaged in a community-based participatory research project. This research method involves the affected communities in each stage of the research process: inception, planning, recruitment, conduct and education, which are the keys to reducing health disparities. Twenty-five women were recruited into the lifestyle intervention program that required providing blood to test for metabolic syndrome and risk for breast cancer. The women involved were willing to provide blood for the study. 76% of the 25 women in the lifestyle intervention program were either obese or experienced metabolic syndrome. At the end of six months, 78% of the women who participated in the study reduced their body fat by 2%, by reducing dietary fat consumption. Approximately 93% of the women increased servings of fruits and vegetables in their diet and engaged in some form of exercise after their enrollment in the study. This program is currently sustained by community support groups directed by Loistine Herndon from the Temple Community Outreach center.

The project director, Dr. Padma Tadi Uppala, Clinician Dr. Hildemar Dos Santos and students Amanda Dupre and Persila Mohammadnia from the School of Public Health meet with the women once a month and monitor their lifestyle changes. Community-based participatory research projects that engage community partners through the entire process of research planning and conduct may result in effective sustainable projects that will result in resilient communities.

Findings from the study will be presented at the Sixth American Association for Cancer Research Conference on the Science of Cancer Health Disparities in Racial and/Ethnic Minorities and the Medically Underserved in Atlanta, December 2013. Faculty from the School of Medicine who collaborated on the project include Senthil Maheswari, MD, Physician, Surgical Oncology, Sharon Lum, MD, Director, Breast Health Center, and Carlos Garberoglio, MD, Chief, Surgical Oncology.